Why Do We Even Have Those Seven Fishes?

The Feast of the Seven Fishes. It wouldn’t be Italian Christmas Eve without them.

As far back as I can remember, Christmas Eve was my absolute favorite night of the year. The day was spent in feverish anticipation of the food, songs, presents, and other shenanigans to come. And one smell punctuates all those shenanigans: fishy fish fish.

When we walked up the brick stairs to my Nonna’s house, we were greeted by a giant plastic light-up Santa and, as we opened the front door, the wafting smell of seafood. Entering the kitchen, we were met by an already watery-eyed Nonna getting emotional whilst stirring a pot full of tentacles.

Over the years our table was graced with scallops, calamari, octopus, haddock, cod, shrimp, salmon, and sometimes, when times were good, crab legs. Of course, I didn’t touch any of it for 25 years, but once I finally decided to eat fish, it was damn good.

Recently, someone asked me why we have seven fishes on Christmas Eve and I realized that I actually had no idea. So in honor of the approaching holiday–one I’ll be spending with my Italian side of the family this year–I did a little digging.

The Feast of the Seven Fishes is a distinctly Italian-American tradition, although its origins are rumored to be from Southern Italy. According to all-knowing Wikipedia (which is a totally trusted source), Southern Italians, in their obsession with the Virgin Mary, would fast during a period they called The Vigil, which is basically the time spent waiting for Mary to huff and puff and blow that holy child out in a dirty manger.

What does all this have to do with fish? I’m getting there. Apparently all that omega-3 and cholesterol helped the Virgin Mary have a smooth delivery.

Okay, that’s a boldfaced lie. But here’s the likely answer. Catholics are the worst kinds of vegetarians. In order to fast during high holy days, we refrain from eating meat. But yeah, we totally go to town on that fish. It reminds me of this scene in My Big Fat Greek Wedding:

So Southern Italians would maybe eat fish on Christmas Eve to honor the time the Virgin Mary spent destroying her vagina giving birth. Take a minute to let that sink in. If you’re anything like me, you are making all kinds of gross fish puns in your head right now.

Anywho, us Italian-Americans…we completely bastardized the tradition. Because just one fish isn’t enough for us gluttons, we decided to go with seven. No one knows why that number, but it seems appropriately too large for one meal. Which is apropos, since I keep seeing this being shared around the Internets: 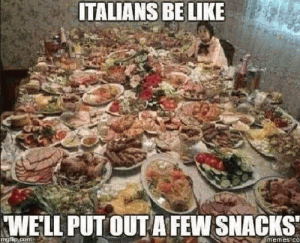 So there you have it. That’s as close to an “answer” as I could find doing a couple lazy Google searches. If you want more serious journalisming, you’ll have to pay me. A lovely seafood meal would go a long way…

When the Going Gets Tough, the Tough Read Little House on the Prairie

How to Rebel Against New Year’s Resolutions: Eat Like a Champion