This 9-Year-Old Prodigy Is Making Me Rethink My Life 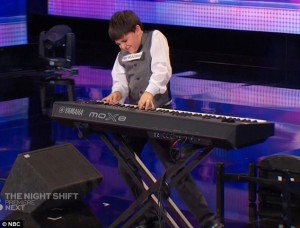 Today I came across a video of a 9-year-old boy playing Beethoven and Chopin with the technique, phrasing, and passion of someone well beyond his years. Adrian Romoff is a cheeky little monkey who’s headed into 10th grade next year and will likely graduate high school in the next two years.

Watch him play and I dare you to not be bowled over by his talent.

Seeing Romoff on YouTube (and then watching his America’s Got Talent audition),  made me think about what I was doing when I was 9 as a dancer—shuffle ball changes, mostly, and perhaps figuring out how to do a single turn. Initially, I felt that familiar twinge of regret that I hadn’t worked harder, started earlier, or had the natural talent that so obviously flows through this kid’s fingers. But then a second, more mature feeling stepped in and talked me down from the ledge.

There’s no need to feel threatened by this child prodigy. There’s no need to regret anything in your life because one child happens to be incredible smart and gifted. I can look at him and appreciate what he’s got, yes. But then I can also mourn for him, because I know there’s a whole part of childhood that he’s missing out on.

And this is not to knock his parents or judge his own life choices. He is certainly experiencing something most kids never will. But as I’ve grown, I’ve learned that every. single. life experience is a trade-off. For this one thing that you get, another thing gets taken away.

I started dance at an older age than most, which left me at a bit of a setback. I used to kick myself for this while I was deep in the throes of my dance obsession. But that late start also meant that I spent the early years of my childhood in free play to explore many interests with no commitment. I dug holes in my backyard looking for dinosaur bones. I went to science camp. I painted and colored. I wrote stories. I rode horses. Looking back, I’m so grateful for those experiences. And I’m also grateful for the years of dance when I had no time for anything else.

This child, Adrian Romoff, is experiencing something wonderful. He’s in deep, he loves what he’s doing (it’s written all over his face). He’s extraordinarily smart, so he’s sailing through school at an incredible rate. But on the flip side, he loses out on hours spent watching ants march into their holes, riding bikes with neighborhood friends, playing baseball, dancing, listening to music, building forts, whatever. My guess is he spends a lot of time practicing and studying, and has little time for any other extracurricular activities. Later on, when he’s older, he will recognize that was a sacrifice he made. He may feel a little regret…or he may not.

All this is to say that with any life choice there is an equal and opposite non-choice, and either one of those experiences can be validating and life-affirming. If Romoff didn’t choose to play piano, he might just be a regular little boy having fun. Personally, I’m glad he chose it because he can now share his gift with random strangers on the Internet and move them to tears, to really think hard about their life, to appreciate what he’s doing, and to also appreciate what they themselves didn’t do.