No, I was not rich. That’s just the size of houses and land in Massachusetts.

Because the acre of yard just wasn’t big enough, I would wander across the street to what me and my neighbors affectionately called The Field. The Field was a sprawling, 99-acre playground for five rambunctious kids who lived on Old Princeton Road. There were trees to climb, a pond to ice skate on and catch tadpoles in, and secret trails that we believed led to a mysterious Indian burial ground. (They didn’t.)

But mostly, it was just acres and acres of wide-open field. Field as far as the eye could see. Field that you could twirl through like Julie Andrews singing, “The hills are alive!” 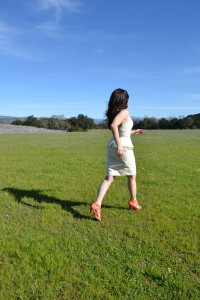 I was always drawn to The Field much more than The Woods. The woods were dark and musty. Trees bearing down upon you, raining sharp needles and startling you with thick clusters of caterpillar nests. In The Field, I could breathe. I could just be.

When I moved to California, one of my favorite things was just how vast the land felt. You look one way, and you stare across the dark waters of the Pacific Ocean all the way to the horizon. You look the other way, and your eyes are met with perfect rows of vegetables stretching on and on to the base of the Coast Ranges.

So it came as a great surprise to me when I saw how Californians build their houses: Right the fuck on top of each other.

One of the reasons I agreed to buy our house in Salinas was that there wasn’t a house directly behind us. (Whereas most of the other homes we saw were flanked on three sides by neighbors and had windows that gazed directly into other people’s windows and roofs so close that you could hop from one to the next like Spider-Man running down criminals.) Still, my house in Salinas was not perfect: I had no windows on one whole side of my home and the other side stared directly at a two-story wall.

But! I had 1,764 square feet of living space that was all my own. Now, me and Alex are crammed into a single bedroom like sweaty New Yorkers on a rush-hour 6 train.

All things considered, our tiny living situation is not terrible. We get along really well with my brother- and sister-in-law, and sharing the household chores and child-rearing duties has actually been a huge relief. I cannot stress this enough: I am SO GRATEFUL for their help.

But that doesn’t mean I enjoy stuffing my entire world into one room.

Some nights, I’m laying at the edge of the bed with my iPad on my lap while my husband games and my son plays with the fan in our room. In one moment, I feel content, surrounded by my sweet little family. The next, I feel so claustrophobic that I end up throwing off the covers and tearing down the hallway. I’m so uncomfortable that I haven’t had more than five hours of sleep.

I know I’ll never have 3,000 square feet of home and an acre of land here in California. (Though there’s seriously so much land here…I just DON’T UNDERSTAND why builders insist on huddling homes together like emperor penguins in an Antarctic winter.) But I’m asking the housing gods right now: please send us a home that has at least a wee bit of breathing room between it and the neighbors. That I can look out the window and see leaves and grass and sky instead of walls and windows. And please, if you could…