Why Center Stage Might Be the Best Worst Dance Movie Ever 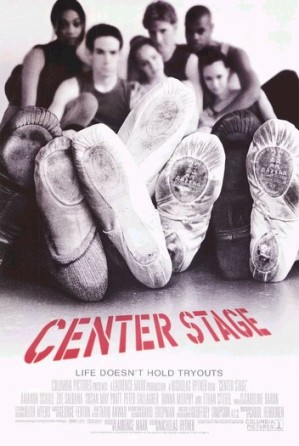 Before I officially begin this review, I would be remiss if I didn’t tip my hat to Lindy West, my favoritest of Internet writers. She has something of a movie review series on Jezebel wherein she rewatches movie favorites and tears them to shreds. It makes me snort-laugh while I slap my knees (I’m a knee-slapper). This is an homage to that, only with classic dance movies. And I will begin with what is arguably one of the best.

We open on an audition scene, cut to the chase, these girls get the job and it’s on to the American Ballet Academy, the fictional feeder school for the American Ballet Company (Hollywood’s attempt at mirroring the real-life, uber-prestigious American Ballet Theatre). Zoe Saldana hangs out with her “ethnic” Queens friends and chain smokes while she ponders working at Hooters instead of taking the scholarship to ABA. 1. Do dancers still smoke? They sure as shit did in 2000, when this movie came out and when I was still dancing. Sure, cigarettes didn’t help so much with stamina, but they did help with dealing with stress and curbing the appetite and dealing with the stress of having to curb the appetite. 2. No one in their right mind with the technique and the ticket into ABA (ABT) would ever consider working at Hooters. No one trains a bajillion hours and puts herself through ballet auditions and gets into a top program…and goes to Hooters. This is the least plausible storyline in the entire movie.

However, I’ve got to bow down to the dance gods/casting directors of Center Stage. This movie features the best dance technique, outside of anything Baryshnikov does in White Knights, that has ever made a motion picture splash. Step Up? Yeah. Amazing hip hop. But the best breaker doesn’t have to train the way a serious principal ballerina does. He (generally) doesn’t need the years and years and years of obsessive striving for perfection and body mangling that a true ballerina needs. Ballet is just harder. I say this having studied both ballet and hip-hop. Other movies purporting to showcase ballet during this time, like the laughable Save the Last Dance, were just NO. I’m sorry, but Julia Stiles is maaaaybe passable as an actress. Prima ballerina, she is not. Her arabesque made me want to cat vomit into her shoes.

Moving on. Jonathan, the caterpillar-eyebrowed director of the ABA/ABC, gives students a little pep talk to start the program. He tells them: “Maybe you were the best dancer in your class. You received praise from your teachers, you won awards, you got into this program. You think, it’s only a matter of time before you are dancing before packed houses at Lincoln Center. For most of you, that will never happen. I don’t say this to be cruel, I say this to help you clarify your expectations.”

This speech is supposed to be mean. I think it’s merciful. The truth is, the chances of making it into one of the very best ballet companies in the world are very slim. I think it’s far less cruel to tell dancers the truth than it is to sell the idea that if they only work hard enough and love it enough, they can make it. Newsflash: that’s bullshit.

Also, to be clear to audiences, anyone good enough to get into the ABA (ABT) student program will likely have a long, happy career in dance. With ABT? Not guaranteed. But with other regional ballet companies, very likely.

Onward. We are introduced to one of the TWO ridiculously contrived “love triangle” subplots of this movie. Cooper Nielson, ballet’s bad boy and superstar, loses the girl to the thick-browed company director. Cooper Nielson is now bitter and out for ballet revenge. Cooper Nielson sounds like the name of my leather-jacket-wearing crush I wrote about in my 4th grade novel about a girl named Jordan Byer who…did something, I don’t remember.

Next, Center Stage does the requisite “I’m busting my ass in dance class” montage, only this time we can see that the ballet teachers are not pleased about the star of this movie, Jody Sawyer, and her shaky technique and un-ballet body. Those unfamiliar with ballet might not see what they are seeing: her turnout is about 2 degrees shy of perfect, so that means it sucks, and she has, I dunno, a big head? I never quite saw the body issues they were talking about, but this is Hollywood so Lord knows they can find something.

Still, Jody finds solace in the friendships she’s forming (awwww) and all the kids sneak out onto the empty Lincoln Center stage (get it? get it?) to pretend they are dancing to packed houses, even though Jonathan told them that was likely to never happen. This scene gets me right in the depths of my beating black heart because I’ve done that before. I stood on an empty Broadway stage and gestured at a pretend audience and imagined what it would be like to really be up there, and even just thinking about it sends chills up my spine into my head, out my face, down my arms, out my fingers, into my gut, shooting down my legs, and straight out my toes.

Anyway, the good feeling doesn’t last long because the friends go out one night to escape their dance troubles and…dance. They go to a salsa club and get sweaty and hook up with women three times their age and smoke and drink and regret it the next day, when they show up to class still loopy drunk from the night before and promptly get tossed out.

Would this ever happen in the real dance world? Yup. If you’re a serious dancer, chances are, you’ve done this. You dance so much that there will come a point when you make a stupid decision the night before class and then arrive totally unprepared. It’s the worst. Guess what? You will get thrown out. That’s real. You’ll also get thrown out just for being a jackass or unfocused. This happened to me twice in my life. It was embarrassing enough for it to never happen again.

Meanwhile, Jody is still being shit on for her crappy technique while Maureen, the princess of the program, gets all the eyeroll-inducing praise from the teachers, and you just want to punch her in her leotard crotch. So Jody once again escapes the confines of the ABA program to forget about her dance troubles and…dance. She arrives at a professional New York studio that is so trying to be Broadway Dance Center, but its attempts at showing “cool” jazz dancers are laughable. These guys are cool because they wear colored leotards and bandanas in their hair, okay? Also they do hitch-kicks. 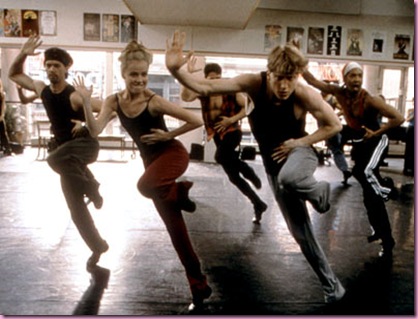 Jody shows up to the jazz class and they immediately launch into a full choreographed routine. I have to shoot down this Hollywood dancer stereotype right now. No one knows the goddamn steps right away at the first shout of “5-6-7-8.” You need to break it down first, and it takes nearly an entire class to learn a combination. It moves fast, yes. At a professional studio, you better be able to pick up the steps lightning quick. But yeah, teacher doesn’t turn on the music and say “Go!” and students don’t immediately know half a song’s worth of choreography.

Jody ends up hooking up with bad boy Cooper Nielson. Mistaaaaaaake! After having stinky post dance class coitus, she goes full  stalker status, showing up backstage unannounced in the middle of one of his shows. Guess what? Dude needs to focus. He just finished doing about a million fouettes. He ain’t got time for you.

Meanwhile, Zoe Saldana’s character Eva has attitude problems (surprise). So her teacher gives her this speech about practicing at the barre: “If you come back here [the barre], you’ll be home.” This is why I’m not a ballet dancer. The barre is the fucking worst. Still, for some reason, I get a lump in my throat when I see Zoe Saldana at the barre at night.

Blah blah blah, there’s also a bulimic subplot (another surprise), and it’s Maureen, the princess with an uptight asshole-clenching stage mom (yet another surprise). Maureen’s got a pre-med boyfriend from Columbia who makes her realize she’s not just a ballet dancer, she’s a person. Thanks, boyfriend, for saving the day. You just ruined her ballet career.

So all the students are preparing for this showcase at the end of the year where the fate of their ballet futures will be determined. In a surprise twist, Maureen ditches the lead role in Jonathan’s ballet all “fuck you, Mom!” and Eva comes out and kills it in her place. (By the way, Eva was not the original understudy for this part. She learned an entirely different part for this showcase. But she magically knows all the right steps.) P.S. that would never work in real life. Her partner, having never worked with her, and her, having never practiced with him, would have ate shit come performance time. Also, company directors don’t like insolent fucks. So no, she’d never get hired.

But ladies and gentlemen, the very best part of this movie is Cooper Nielson’s “ballet for the people” to Michael Jackson’s “The Way You Make Me Feel.” There is nothing so iconic as Jody pirouetting out of her white costume into that red tutu, and the mid-performance pointe-shoe change and insta-cornrows. (For the uninitiated, it takes a solid five minutes at break-neck speed to put on a pair of pointe shoes. Not two seconds.)  Here’s all you need to know about this scene: Cooper Nielson drives a motorcycle on stage. He has choreographed an on-the-nose story about his love triangle that involves him and another milquetoast ballet dude pulling Jody’s arms from opposite directions. I wonder what that’s a metaphor for? This is something I would have choreographed in my 7th grade talent show dreams. But it works. It’s fantasy ballet choreography porn at its finest. 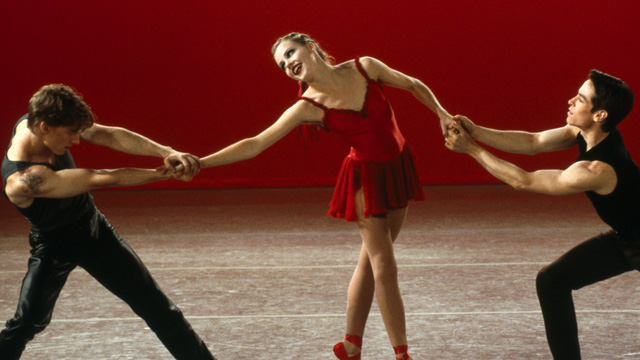 So the movie ends with Maureen going to regular college, Jody getting a lead role in Cooper’s new ballet company, and most of the other dancers we’ve been following getting into the American Ballet Company, even though Jonathan told them that would never happen. Happily dancing ever after!