When the Going Gets Tough, the Tough Have a Nervous Breakdown

Or very nearly do.

I’d categorize this latest bout of stress and anxiety brought on by the BlogHer conference as a “near-miss.” Over the last week, I bit off a little more salami than I could chew. (That sounded a lot less gross in my head, but I’m leaving it). I had my usual job and motherhood duties, of course, but then I set a course to attend BlogHer and unleashed a wave of self-imposed, unreachable to-dos that sent my brain into LUDICROUS SPEED, and before I knew it, The Olive Gal had gone to plaid. 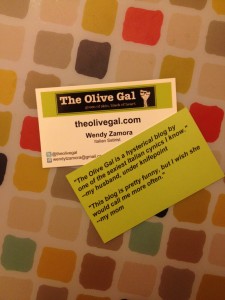 It started small. First, I needed to create business cards because I was told this is sort of the thing that happens at BlogHer. But before I made cards, I would have to tweak my logo to be “just so.” So a designer buddy helped me out and I fumbled my way through Vistaprint to make some cards. Fine.

Then I joined Facebook groups and Skype chats and found myself in a sea of anxious women wondering what to wear and realized, oh shit, I hadn’t really thought about that. So I got a haircut and bought a new fancy bag to hold my plethora of business cards, and I thought, okay, now I can just go and enjoy. But it was too late. The stress-beast had been unleashed.

All of a sudden, I’m practicing my “elevator pitch” and dreaming of signing with agents and wondering if I’ll team up with sponsors (which is sort of hilarious because you need to have TRAFFIC to your website before agents or sponsors consider working with you). I’m going back through every post and tweaking and re-writing and scrunching up my nose at some real stinkers. I’m ramping up on social media. I’m following even more blogs and commenting and watching analytics with a new critical eye.

This is all manageable stress, though, the good kind of stress—the stress that motivates you to become a better blogger, a better writer, to magically transform your little corner of the Internet into a transcendent comedy masterpiece. In the lead-up to and aftermath of BlogHer, I wanted to really push myself, to put my skills as a writer to the test. I found, though, that the harder I tried, the harder it sounded like I was trying.

And then came the voices. (Okay, bear with me. We are going to take a little walk into crazytown. You don’t need to roll up your windows and lock your doors, though. It’ll be alright.)

Fellow bloggers and writers know exactly what I’m talking about: the impostor voice that so many super successful bloggers spoke about as they stood up on stage reflecting on how they got there. This impostor voice tells you that you’re terrible, you’re worthless, you don’t measure up, you will never be successful, you will never write a book, you should just disable the URL now and save yourself the grief.

The impostor voice can be incredibly convincing.

As much as I was inspired at this BlogHer conference, I was also terrified, and the impostor voice saw this as a prime opportunity to slip in and compare myself against the other voices I was coming to admire. Oh, Aussa Lorens! She’s so brilliantly irreverent and sharp and beautiful. Clearly she’s a star in the making.

Impostor voice: Your blog sounds nothing like her. You should shut it down.

Oh, Ashley Garrett! She’s such a lovely storyteller. She captures the mood of the moment by keenly observing her surroundings. She knows how to show not tell.

Impostor voice: Your blog sounds nothing like her. You should shut it down.

Impostor voice: You may try to convince yourself that it’s a good thing that you don’t sound like other people. But the fact of the matter is, you don’t have a voice yet. If you stopped writing tomorrow, no one would care.

Me, in a small voice: I would care.

Me, in a voice getting louder: I would really care. In a way, I live for this. I am compelled to do this, and maybe I have room to grow, and maybe I don’t have an audience, but I have a voice, and it’s me.

Me, now shouting: My blog is my lifeline! It’s my joy, it’s my exquisite pain, it’s my innermost demons, it’s my raw nerves exposed—it’s my humanity!

I went in and came out of the BlogHer conference hoping to making waves, to see some professional changes take place, and to, let’s be honest, gather more Twitter followers and get more eyeballs on my site. But after the dust has settled and I’ve successfully avoided a nervous breakdown, I’ve realized that what I got out of BlogHer was so, so much more valuable than that.

I now know why I’m here. And I’m not going anywhere.

16 thoughts on “When the Going Gets Tough, the Tough Have a Nervous Breakdown”