The Epic Argument That Almost Ended in Divorce

Every once in a while in a marriage, you come to a crossroads. Should we keep slugging away and work through this thing? Or should we just split up?

During a recent, ridiculous argument, I came thisclose to calling the whole thing off. But to understand how I got to that point, I have to take you on a little trip through memory lane.

Once upon a time in a living room in King City, two brothers decided to torture their younger brother, whose only crime was asking to go see the movie 28 Weeks Later with them. The oldest brother, Alex, told his youngest, pre-teen brother, Zamir:

“You’re a giant pussy, and there’s no way you can sit through this movie.”

Zamir, of course, insisted he was junior-manly enough to handle it. So Alex and Ozzy (middle brother) put him to the test. They said that if he could grit his way through 28 Days Later, then they’d bring him to see the sequel. So they popped in the movie, and a pseudo-confident Zamir sat next to them.

But you guys, here’s the thing: I SWEAR I was there. And Alex insists I was not.

28 Weeks Later came out on May 11, 2007. That was a mere four months after I had moved to California, and I knew no one else except Alex and his family and friends. If Alex was in King City, so was I.

But apparently…I wasn’t. We argued and argued and argued, and finally Alex called Ozzy for backup. “Nope,” Ozzy said. “She wasn’t there.” I still insisted. I can distinctly remember where Zamir was sitting and his voice as he said, “Oh snap!”

Alex checked with Zamir. “Was Wendy there when that happened?” Nope. Alex explained that they’ve told the story so many times, I must have come to believe I was there in person. I got served. But I remained frustrated, and continued to argue my point. Because if I wasn’t there, then…

Where the hell was I?

And here’s where the epic argument went south. Alex damned himself by saying that I DIDN’T EVEN LIVE IN CALIFORNIA at that time. Apparently, I’m the one with the shitty memory, but he’s the one who has purged entire months of our relationship from his brain.

Just as I stubbornly insisted that I was there when Zamir tucked tail and booked it back into his bedroom, Alex contended that no, I did not live in California at the beginning of 2007. His side of the story was that I spent the summer of 2007 in Massachusetts looking for jobs and THEN moved out west.

Left Dance Spirit magazine in January 2006. Moved to California in February 2007 (lived with Alex’s friends). MOVED IN WITH ALEX in April 2007. Went to Massachusetts for the summer to look for jobs. Failed. Came back in September 2007 for good.

I guess I was such a good roommate that he had no idea I was there!

The argument intensified. I keep pulling up facts and figures and dates and specifics, and Alex dug in his heels. Since I had lost so spectacularly in the Zamir argument, there was no way I could be trusted. My blood was beginning to boil. A miasma of red anger was clouding my eyes. I could feel my skin turning to green when I said, “Don’t you remember? You proposed to me that summer! Why would you propose to someone who had not yet lived in the same state as you?”

“Oh, I didn’t remember proposing to you then.”

The natural, level-headed reaction to that from me was, “Fine! I never lived in California in 2007! You never loved me! And we should just get a divorce!”

Thankfully, this was so absurd that Alex just started cracking up, and so did I. But in seven years of marriage, that’s the first time the D-word has escaped my lips.

Problem is, I have opened a can of worms. Because now, in true Zamora fashion, he will lord this over me for the rest of our lives. For example, a recent Twitter conversation: 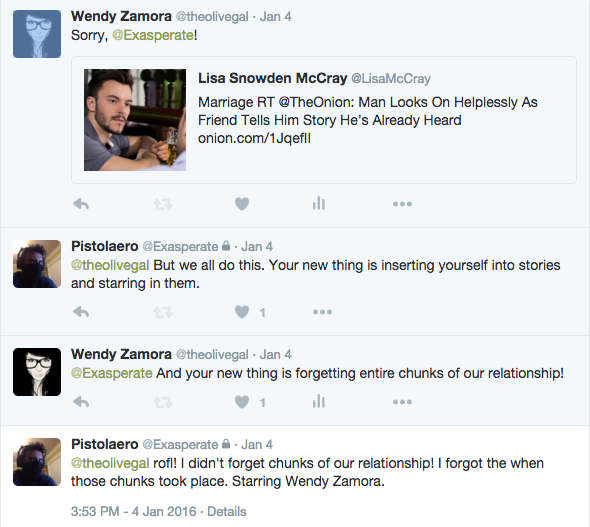 And I can’t take it. Divorce may be the only way to escape.