That One Time I Got Struck By Lightning

This morning in San Jose, the sky was ominous and dark and the rain fell in sheets. As I stared out the window of our 10th floor office, I saw a flash of light in the sky and felt a low rumble of thunder. I was in a glorious happy place, contently sipping my coffee as I churned away at the morning’s work. Another rumble of thunder and I hear:

Californians. I love you guys. You are so used to undisturbed blue skies that the smallest hint of “weather” sends you into a melodramatic tailspin. Case in point, this NBC Bay Area news story about thunder and lightning. The struggle is real.

But while my officemates were saying their Hail Maries, I was going full Lieutenant Dan. I can’t help it. That’s what I do in a good rainstorm. 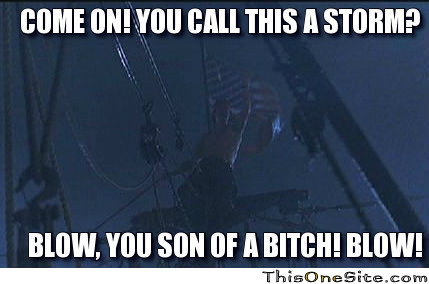 Which brings me to my story about being struck by lightning.

When I was 13 years old, me and my friend Jackie Henry were hanging out at home doing what all bored kids do in the summertime: absolutely dick. Then, quick as a hummingbird’s hiccup, the weather turned. We went from oppressive heat to serious heat storm, the rain drenching us in oversized, sloppy drops. Since we were already in it, we decided to just run with it, hooting and hollering at the sky while terrible red branches of lightning reached their claws to the ground.

“Is this all you’ve got?!” I screamed at the sky in so much irony.

Because we were teenagers, and teenagers must immediately jump on the phone to brag about whatever it is they are doing, we ran inside to the basement after about five minutes of that nonsense, and I picked up the orange rotary phone. You know, the one with the exposed wire at the end of the chord? I grinned a toothy metal grin full of braces as I dialed my “boyfriend’s” number.

I couldn’t make this shit up, guys.

Just as the call went through, lightning lit up the sky and a zap told me the telephone pole had been struck. I didn’t have time to process that, though, because (as Jackie later recalled for me), a tiny streak of light danced from the receiver to my mouth and knocked me to the ground.

Jackie frantically stood over me shouting “Oh my God! Are you dead? Are you dead?” No, I was not dead. Just an idiot.

Later that day, traumatized from my brush with death, I huddled in blankets and shivered as dramatically as possible for my parents to see when they returned home. Boy, would they be upset to learn that their only daughter was almost killed by lightning!

Like…they had to walk away.

I was horrified. HORRIFIED! How could they laugh at such a serious thing?! I ALMOST DIED, GUYS!

Looking back, I’m proud of them for not peeing their pants on the spot. Because if it were me, there would be no amount of hell to pay. My poor kid would never live it down. I’d be writing about it in this here blog and then bringing it up to his girlfriends the first time we met. I’d make a commemorative video of the moment complete with a “fuck you, Mom” photo taken after said lightning strike. I’d be asking him, a week later, “Hey, remember that time you were struck by lightning?” I’d make a T-shirt that said, “I was struck by lightning and all I got was this lousy T-shirt!”

Okay, I’m done now. I hereby grant you all permission to tell this as a cautionary tale to all of your friends who think they’re badasses in the rain. And to your pussy California friends who really do think they’re going to die from a little bit of thunder when they are perfectly safe inside. Let me tell you something:

You’re fine. I was struck by lightning.