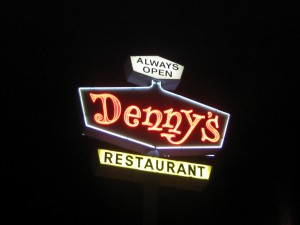 Before I get this started, I’ve got to make a few corrections to the headline. Not all of us were drunk, and not all of us are middle-aged, but you’ll forgive me if I flubbed. Four middle-aged drunks, a couple sober twenty-somethings, and a handful of slightly tipsy early-30-year-olds just doesn’t have the same ring to it. Still…we did all go to Denny’s.

As promised in yesterday’s post, I’m here to tell you the story of how we tortured a 17-year-old…or was it 19-year-old?…waiter at the King City Denny’s. But before I do, let me rewind it back to the tail end of the Mexican wedding we attended on Saturday night. It’s 11pm and our tummies are starting to growl. The band is still playing and we’re plum tuckered out. We get the notion to grab some good-ole American grub and high-tail it out of the party. Just as we’re out the door, we find out that a taco truck will be arriving in 30 minutes. Gaby really wants tacos. We really want food now. Hungry tummies beat Gaby’s “But I love tacos!” plea. So off we go.

We arrive at Denny’s to a visibly annoyed staff. Perhaps they thought they’d be able to let a waiter go home early, maybe take a break. But nope. Drunken middle-aged fools in wedding attire have come to crash the party. We’re all giggling as we’re seated, because what’s funnier than being drunk at your hometown Denny’s? (Except for Zach Morris-sized early 90s cell phones. Those will always be funny.)

As the waiter comes over to take our order, we are transported back to 1996 when our friend Eric asks to order the “garden burger.” Waiter repeats, incredulously, “Garden burger?!” For real, I’m not sure he was alive when people were ordering garden burgers. Veggie burger, Eric. It’s called a veggie burger.

So fine, he orders a burger with veggie fixin’s and everyone’s okay—except for Gaby, his wife, who has now degenerated into fits of cry-laughing. Gaby worries that her cry-laughing is disturbing the other Denny’s patrons, who she’s certain are all spies of Pelo Blanco, her grandmother, who would be very disappointed to learn that Gaby was drunk at Denny’s.

We settle down, wipe tears, and start devouring our orders of Denny’s fried goodness, when Eric spits a half-masticated bite of burger into his napkin. Meat. It’s a meat burger. (Beef burger, Wendy. Beef burger.) Eric is vegetarian. Joke’s on him for ordering a garden burger!

Gaby has now evaporated from cry-laughing so hard, but not before she notices a fancily- and scantily-clad party dress group accompanied by a disgruntled female lumberjack. I can’t remember if actual words came out of her mouth or not, but let’s just say she (and I) spent the next few minutes alternating between catty lumberjack comments and then feeling bad for our catty lumberjack comments, but then being like, but seriously, why is the angry lumberjack hanging out with the Forever 21 Ohmigahd Guys mini-dress crew? Is she their body guard? Did they have some wood that needed chopping? Genuinely confused about that lumberjack chick. It will haunt me for days.

I turn to Zamir, my brother-in-law and our sober 20-year-old companion, and I ask him if he’s embarrassed to be with us in public. He replies, “I can’t wait until I’m 21.” True. There’s not much better than being drunk in your party clothes at your hometown Denny’s. Except for Zach Morris phones.