Taylor Swift’s New Video Reminds Me Why I Hate Her

Through no real fault of her own, Taylor Swift has always been one of those people who I have hated HARD. This is not, I realize, a healthy sentiment for an adult human being to have for another less-than-adult human being. Lord knows she’s accomplished way more than I have in my life, so she can Hater’s Gonna Hate at me all day, and I can only Kanye shrug back. I acknowledge that I myself am a pretty shitty person for having such venom for a person because why…she seems obnoxious? All these people claim she’s got such crazy talent and I just don’t see it? That doesn’t really justify HATING someone, but I do. I’m sorry. 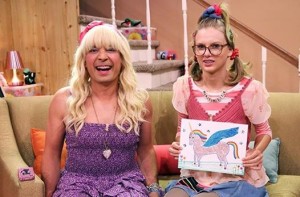 Still, in recent months my icy Taylor Swift hate had begun to thaw. She did a pretty funny EW skit with Jimmy Fallon. She does cross-stitching. She’s pals with Ed Sheeran, who’s one of my favorite favorite Brits right now, right behind Sam Smith. She took an awesome girls-only vacation to Big Sur and posted tons of pictures of them dancing around in the trees like wood nymphs. I started to wonder if my Taylor Swift hate was a bit misplaced. (Though, trust me, I still very much dislike all of her music. There is not a single thing I like about any one of her songs. They are all terrible.)

But then she had to go and release this video and remind me why, oh yeah, I really can’t stand this girl.

First of all, kudos to Swift for using real professional dancers in her video. Also props for representing several different styles of dance, from ballet to hip hop to contemporary. (Though she’s got this super outdated Martha Graham version of what modern dance looks like, but okay, we’ll take it.) The thing is, I’m not sure I understand her point in using the dancers.

The prevailing lyric of “Shake It Off” is “the players gonna play, play, play, play, play, and the haters gonna hate, hate, hate, hate, hate.” Okay. First of all, I can see why people call her a brilliant songwriter. Second of all, who are the dancers supposed to be? The haters?The popular people? Taylor Swift dresses herself up in dance attire and awkwardly attempts each of the styles. It (purposefully) does not go well. In doing so, she is essentially parodying the real dancers. Her tired “I’m awkward, like you!” schtick falls flat here because, by and large, dancers are a fairly misunderstood group while she, a pop star, is mostly revered.

Take, for example, the twerkers, who white pop stars just LOVE to use as props. At least Swift elevated twerking as a legitimate style by including it alongside the other dance genres. But then she had to go and crawl underneath the twerkers and gawk at their gyrating asses while wearing “ghetto gold.” Considering what’s going on in Ferguson right now, this seems more than a little insensitive.

Swift ends her video by bopping around with all her other awkwardly white (except for one token black!) friends like they’re at a pre-teen sleepover. Is this supposed to be Taylor Swift, the pop star, showing us how much she relates to us, the outsider plebs? Is this her “take down” of the professional dancers/haters?

And this is where I realized what really grinds my gears about Taylor Swift. For her entire career she’s been going, “Oh, I’m an outsider! I’m so misunderstood!”, but I’m not buying it. She was commercially successful at an age when most people were crying in the bathroom stall because their classmate pointed out their hideous zit was oozing in class. What makes you so unaccepted, Taylor? You’ve been one of the top-selling pop artists since you were 17 years old! Yes, you get a lot of hate thrown your way, and that has to be tough to take—especially as a young person. But don’t package it up as “I’m the awkward girl in the bleachers no one likes.” NOPE! You are not that girl. You are totally the fucking cheerleader who the boys all drool over.

And here’s another thing—it does not make you charming or endearing to don a tutu and pointe shoes, or (and God, the racial tone-deafness here is just frightening) hold a boom box and wear a trucker hat to show us that you can’t do what professional dancers train hard to do for decades. That just makes you NOT A PROFESSIONAL DANCER. And I’m all for having an awkward dance-off—me and my best friend practice giant pas de bourrees and jazz runs across our living rooms on the regular. But the context here is not just having a little fun—it’s showing us that it’s “cool” to be awkward by shitting on the people who are not.

Before people get all snippy at me (because this happened before with Free People Gate, and everyone was like…seriously, there are waaaaaay more important things to be mad about in the world), I am not really angry at this video. At the end of the day, it’s a piece of fluff and I’m SURE Swift didn’t think something this bubblegum would piss anyone off. But it’s annoying as shit, and it’s adding fuel to my already hotly-burning hatred for Taylor Swift.

Let me just end this by saying that I don’t think it’s very nice to say that you hate a person you’ve never met. I imagine being Taylor Swift and having monkeys like me flinging poo at her all day long, and it can’t be fun. I bet Taylor Swift the person is completely lovely. But Taylor Swift the pop star entity is grating on a level that leaves me seething. Her fake modesty act is such bullshit. “Oh my gosh, I won another award?! I can’t even believe it!” [insert Taylor Swift surprise face] Yes, yes you can, Taylor Swift. You won 16 other awards this year, and this is your fourth of the night.

How about you knock off the fake modesty, cut it out with the pretend-awkwardness, stop posturing that you are so misunderstood and just sing? The more you call attention to the haters, the more we’re going to just keep on hating. You be you, Taylor Swift. Stop feeding the trolls.