Over the years, my BFF Shauna Autenrieth and I have bonded over obscure 80’s finds, communicating almost entirely in song titles. I won’t hear from her for weeks until suddenly this shows up in a text: 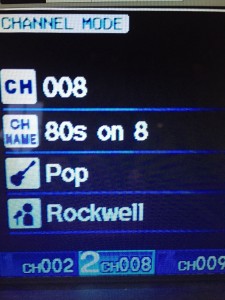 Giggling over Michael Bolton’s “Soul Provider” aside, I’m telling you this because you need to understand how stone-faced solemn I am about my 80’s catalog. I take this shit seriously. And that’s why I’m presenting to you this single, indisputable, definitive, irrefutable top 10 best songs of the 80’s list. These are not necessarily my favorites—they are genre-defining masterpieces.

Are the 80’s a genre of music, you ask? Yes, I argue, and here’s why: There’s a sound that you can pinpoint and go, “Soooooooo 80’s,” whether it’s pop, rock, soul, or R&B. My criteria for determining which songs made the top 10 were whether or not they helped shape that sound. Billy Joel’s “Uptown Girl” is fantastic, but I don’t hear it and think shoulder pads and bike shorts. Too timeless. Not on the list.

So without further ado, I present to you: The Irrefutable Top 10 Songs of the 80’s List.

10. In the Air Tonight, Phil Collins

It’s all about the slow burn. Eerie and mysterious, “In the Air Tonight” creeps up on you in grainy black-and-white until, a full three minutes into the song, a resounding breakdown beat has every white person in the room air drumming like Pavlov’s dog. You can’t not do it. You can’t.

Sweet, sweet opening riff. So much hair. So many bandanas. So much swaying. Axel Rose and Slash are the definition of quintessential 80’s rock. Whitesnake and Def Leopard and Bon Jovi would not have enjoyed the success they did if it weren’t for this song. Also, all hail the guitar solo, which died out in the 90’s when rock and roll guitarists stopped having to be really fucking ridiculous at playing the guitar to sell records.

You can’t have a conversation about the 80’s without talking about Hall & Oates, and “Maneater” checks off all the 80’s boxes. Saxophone? Check. Super Velveeta cheesy lyrics? (“The woman is wild, a she-cat tamed by the purr of a Jaguar…”) Check. Prime for a mean step-dig dance? Check. Bonus points for permed mullets in the music video.

7. Jump (For My Love), The Pointer Sisters

Who here saw the Pointer Sisters perform this number on “Solid Gold”? If you answered yes, you’re allowed to comment on this list. Otherwise fuck off. Yes, this song has made its way into many pop culture references, including a most memorable Hugh Grant dance scene in Love Actually. Still, there is nothing that’s not 80’s about it. Major synthesizer action. Key change for added drama. One-note high octane energy from start to finish. Tell me you don’t want to bust out in a Jane Fonda Jazzercise routine right now.

“Gonna take some time to do the things we never HAAAAA-AAAAA-AAAAAA! Ooooh….oooh.” Do you know what the hell Toto is saying here? Do you care? I don’t bother looking up this lyric because I know it won’t make grammatical sense either way. This song wins for most ridiculous lyrics in a song ever. “Sure as Kilimanjaro rises like a leopress (or is it Olympus? Again…doesn’t matter.) above the Serengeti.” For lyrics alone, this song makes the list. But then you add in some synthesized xylophone and pan flute and well…it’s 80’s magic.

This one had me tossing and turning because I went back and forth on whether it should be “Total Eclipse of the Heart” or “Holding Out for a Hero.” Both are blonde, shag-cut Bonnie Tyler masterpieces. But ultimately, the clench-fisted drama of “Total Eclipse,” paired with the fact that there’s actual thunder, push it over the top.

4. I Want To Know What Love Is, Foreigner

Are you looking at the longing in this man’s eyes? JUST LOOK AT IT. Look at the hands reaching out. Look at the hair. Feel the ache deep in your gut as Lou Gramm power belts his way through the chorus and tell me you don’t shed a single tear that slowly trickles down your cheek each and every time you hear this song.

3. Everybody Wants to Rule the World, Tears for Fears

Usually, when it comes to 80’s music, the cornier the better. “Everybody Wants to Rule the World” is the exception that proves the rule. This song is just COOL and Curt Smith is also COOL and Tears for Fears were COOL and I love them and there’s nothing that you can say to change it. Fast forward to 1:15 of this “Psych” episode and watch James Roday’s expression when he realizes it’s Curt Smith playing an acoustic set in this dude’s backyard. That’s how everyone should feel about Tears for Fears, and this song is what made them feel that way.

Black Michael Jackson WAS the 80’s. Show me a child of this decade who didn’t skip her Thriller album trying to do the moonwalk, and I’ll give you a white sparkly glove. There are four or five memorable hits on Thriller alone, but “Beat It” wins for sheer badassery. The music video features a bunch of gangbangers doing what gangs in the 80’s did best: dance battles. You just kind of HAVE to pop your collar to this song. Did you want a red jacket with rhinestone shoulders? You did, and it’s because you watched this music video a few too many times.

Ladies and gentlemen…the best song of the 80’s. Steve Perry, aka “The Voice,” shows us what happens when you mix the purest vocal timbre with synthesizers and epic guitar riffs. You don’t even need them. Just let Steve Perry sing to you on a pile of wood outside a warehouse and you will openly weep. This song wins for so many reasons, not the least of which is you can’t listen to it once. You only stop hitting repeat when your voice has gone hoarse from attempting to karaoke your way through the greatest song by the greatest band of the greatest decade.