How to Be Uncool: A Lesson from Lester Bangs

Have you ever had the feeling you just don’t fit in? That’s like asking me, “Have you ever had a craving for meatballs and sauce?” I don’t understand the question. Who hasn’t felt this way at one point in their life?

The unfortunate thing is, for people who consider themselves uncool (me), the ratio of fitting in to not fitting in is proportionately disparate, leaning hard in favor of the latter. Translation: uncool people never feel like they fit in.

When confidence is high, this isn’t actually a problem. So what if I don’t fit in! I’d rather not fit in! It’s much better to be genuine and be myself!

Unfortunately, another issue for uncool people is that confidence isn’t often high. This results in some awkward longing, some trying too hard, and plenty of kicking yourself HARD after you say something stupid in an attempt to fix the situation, which only makes it worse.

I’ve known I’m uncool from the point cool became a thing. As a spindly sixth grader, I still let my mom dress me, picking entire outfits directly from the store mannequins because I had zero sense of what to do on my own. I wore braces with elastics color-coded to match the holiday seasons, and my granny glasses made their way halfway down my cheeks. My hair was frizzy and unkempt and I spent all of my free time either at the dance studio or holed up at home with a book. I was a giant target, but I was completely unaware (at first) that I was a target, which only made the teasing intensify.

That year was one of the loneliest and most tortured years of my life. I also happened to write a 200-page novel in pencil on several unicorn-covered spiral notebooks. Great art, it was not. But I made something.

I spent the next few years doing everything I possibly could to fit in. I didn’t even want to be popular, I just wanted to blend into the background and be left alone. I was successful. I dressed like everyone else. I got contacts and the braces were removed. I made a couple friends. I erased my entire novel, painstakingly, page by page. No, I didn’t just toss the notebooks. I wore down multiple erasers and then wrote over the whole thing with something banal, like several hundred rounds of M.A.S.H.

Looking back, I think I was more miserable in the years I tried to fit in than during the year I realized how desperately uncool I was/am. So I moved on with my life, waving my freak flag freely, and reserving my fucks to give for only the most fuckworthy of situations.

In my early 20s, Lester Bangs—as played by Phillip Seymour Hoffman in Almost Famous—helped me embrace my uncoolness. He said that most of the great art in the world is made by people who are conflicted and longing and guilty and in pain; people who are uncool. He said:

The only true currency in this bankrupt world is what you share with someone else when you’re uncool.

And I believed him. Up until last week.

It’s been an emotionally shitty week. Feels like I’ve been hit with the sledgehammer used by Lumberjack Property Brother to bust through a wall in order to make an open concept living space.

Somehow, someway, I lost my confidence in being uncool. I’d been so caught up in Silicon Valley corporate politics that I started trying too hard. From a professional standpoint, I tried positioning myself as a certain way…and in trying too hard to “find my place,” I started to lose it.

I began overthinking and asking for permission and surveying and questioning. I told myself it was all good because it’s important to strategize and think hard on these things. But that was only a portion of the thinking I was doing. The rest of it was hand-wringing. And I felt myself slipping away. 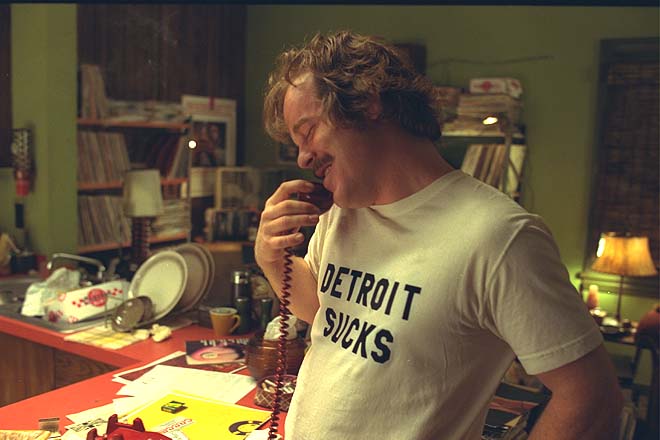 Thankfully, I watched Almost Famous tonight, and as Lester Bangs took a long drag from his cigarette, the tightly wound chord of the rotary phone swinging in the background, it all snapped into place. It was a momentary lapse of reason. A mini existential crisis brought on by self-doubt. I started caring too much about what impact I could make, what my role should be, how other people viewed me.

All of that is meaningless.

At the end of the day, what I care about most is doing good work. Yes, of course I want people to like me—especially the people I see during business hours and beyond. Yes, of course I want to advance in my career. But ultimately, the most important thing me has always been to do something meaningful and to share it with others.

So as I move into the next week, I’ll let Lester Bangs’ Almost Famous quote ring in my ear. I’ll go to meetings and I’ll listen and speak without rolling the words around 15 times in my head before they come out of my mouth. I’ll hold my head high as I walk the halls because I’ll be hunched over my keyboard the rest of the time, doing what I do best: writing…and being uncool.