How Robin Williams Saved Me From Depression

It was the summer after 9/11 in downtown New York. I had just graduated from NYU and, with my fancy degree, was working as a cocktail waitress while I tried to “make it” as a dancer. My roommate was away all day at law school, and it felt as though the rest of the world was moving in rhythm against me. As I took the subway to work, they were on their way home to relax. When I dragged myself through the door at 6am, they were getting ready to start their day.

At first I tried to make my empty afternoons industrious. I’d turn on music and give myself dance classes in my tiny living room, since I couldn’t afford to take many classes at professional studios. I’d pour over casting calls and attend open auditions. I’d write articles for dance magazines, most of which were never published. I’d sweep the floors and dust the cabinets which, no matter how often I cleaned them, never seemed to rid of the grey film of fallen building micro-debris.

After a while, though, I became painfully lonely. In a city of 8 million people, I was isolated and—for the first time since moving to New York four years before—afraid. The gaping hole of the World Trade Centers loomed only a few blocks away. I was not having much success on the audition circuit. I stayed long after hours closing up the bar, drinking whiskey like water. When I’d wake up hungover the next day, I’d close the blinds and stay home from auditions, reasoning that I wouldn’t have gotten the job anyway.

I ordered takeout and holed up indoors, watching the same movies over and over. The movie characters became my friends. And one of those friends was Robin Williams. 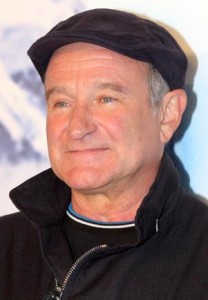 Robin Williams Live on Broadway—the first time I watched it was the first time I laughed a real laugh in months. In fact, I didn’t stop laughing for 99 minutes. I continued to laugh for 99 minutes every afternoon when I dragged my unmotivated, apathetic ass into the living room to finally put some food in my face hole, and I popped in my Live on Broadway DVD for company. I marveled at Williams’ manic energy, the way he poured sweat, swigging 20 bottles of water, taking giant strides across the stage, swinging his arms around like my Italian grandmother in an argument with a puppeteer.

Williams tackled our strange post-9/11 paranoia. It was the first time we really laughed at the absurdity of our reaction to terrorism, the first time we made fun of George W. Bush and Dick Cheney and Donald Rumsfeld and their conspiracy to whip up our collective frenzy. Plus, he told us about that ugly panda bitch he wouldn’t fuck with a koala’s dick.

Williams quipped, “Every so often Rumsfeld comes out and goes, ‘I don’t know when. I don’t know where. But something awful is going to happen.’ What is it, the Central Intuitive Agency now? Are you working with Miss Cleo?”

Williams’ ability to laugh in the face of darkness showed me that laughter was the key to breaking the cycle of fear—not only the real fear of future terrorist attacks, but also the false fear deliberately engineered by the government in the name of national security. My fear of the future, of failure, of not being able to pay next month’s rent, of, yes, another terrorist attack—it had become my master. In trying to suppress the fear, I had suppressed all other emotions and I was teetering on the edge of depression.

When depression has you in its grips, you are no longer afraid, but you are also no longer alive. You stop feeling to protect yourself from fear or pain or both, and at some point you are unable to access the things that once brought you joy. You are left with nothing but what seems like an impenetrable wall. What cracked that wall for me was Robin Williams’ impression of cats as drag queens.

From that moment forward, I knew my way out of the darkness was to make fun of it. I stepped outside of myself to view the audition scene as the circus that it was, and all of us dancers its unwitting clowns. I chuckled at the irony that I had forgone a full scholarship to a dance conservatory in favor of an expensive liberal arts school—only to embark on a career as a dancer after all. I stopped taking myself so seriously and suddenly…magic. I could feel the life flowing back into my fingers and toes.

Humor is a great mask, a wondrous coping mechanism. It’s what Robin Williams used to shield us from his pain. The fact that he did it so brilliantly makes his loss that much more devastating. Williams taking his own life does not make him weak. It made him gravely and fatally ill. The fact that he kept the demons at bay for so long while also bringing so many others so much joy is a testament to his genius.

This year has been another difficult year for me, and I feel depression eagerly lapping at my feet. But I’ll remember how Robin Williams made me feel safe all those years ago, made it okay to laugh in the dark, and I’ll keep slinging jokes like grenades to stave off the monster. I won’t let it get me. I’ll carpe diem, my captain. I’ll carpe diem.

Are You There, Blog? It’s Me, Wendy

I Can Haz Write Stuff

2 thoughts on “How Robin Williams Saved Me From Depression”