My Hellish Commute Is Turning Me Into She-Hulk

I have never not commuted. Nearly every job in my adult life has taken me at least 30 minutes from walking out the door to plopping my slightly frazzled ass into an office chair. In fact, most of the time it’s taken me around an hour to get from the apartment/house I can afford to the job that barely pays me enough to afford it. So when I took a job in downtown San Jose, I wasn’t daunted by the idea of a commute.

For the first three months of my new job, it took me nearly an hour to get there. Fine. Without Lucas in the car, I could spew plenty of swears while I caught up with family on the phone or worked on my mad car karaoke skills.

Then came the start of the school year. The additional volume of school buses and mom vans crowding the road meant something as minor as a feather floating into the street could back up traffic for my entire route. One minute, you’re cruising along. Next minute, it’s this: 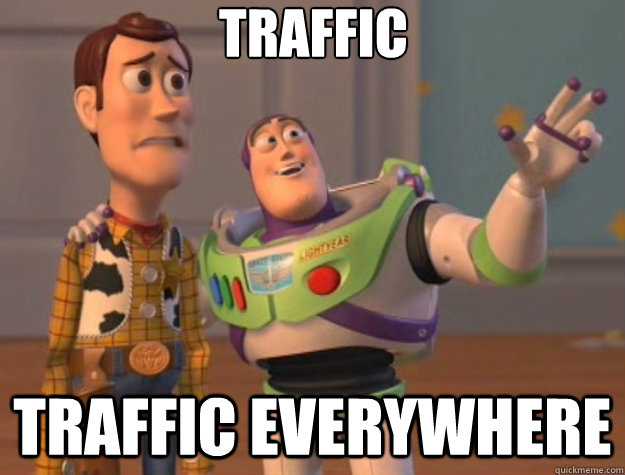 The infamous Silicon Valley traffic. Intellectually, I knew to expect it. But the recent hellish commute has tested my patience like a toddler throwing a mega tantrum just as you’re about to check out $150 worth of Target swag. In the last week, it’s taken me between 1.5 and 2 hours to get to work each morning. And that’s enough to turn even the most patient driver (not me) into a full-on rageaholic.

So you can imagine the scenarios.

When I lived in New York, my morning commute consisted mostly of walking. There were times when the sidewalks became crowded or when idiot tourists paused to look up at things (the nerve), but I could usually passive-aggressively huff as I sidestepped them and continued on my way.

In fact, even openly aggressive expressions were not only expected in New York, they were considered “experiencing local flavor.” A man with a too-large umbrella once shoulder bumped me so hard my coffee flew out of my hands. On several occasions I witnessed people kicking car tires or pounding on hoods if the vehicles dared stop in the middle of a crosswalk. And God forbid if you didn’t perfect the art of the can’t-nobody-break-my-stride card swipe at the subway turnstile.

So no, NYC walking commutes were no Sunday strolls, but you could usually get where you needed to go as fast as your legs could take you. And if people got in your way, you could let some of your pent up anger out in sanctioned, socially acceptable ways.

In a car, on the other hand, you can’t really do much except fling expletive-filled epitaphs on deaf ears, pound on your horn, or hold a quivering middle finger up long enough for that bitch granny going 40 mph in a 55 zone to see. And even if you do do those things, 1. you’re the asshole on the road, not them and 2. you’re still stuck in traffic.

So you sit and simmer for however long your miserable commute lasts (1.5 to 2 hours) until you emerge so full of rage that even the slightest slight causes you to lose your shit. A slow Internet day, for example, is normally a pain in the ass but livable. A slow Internet day after a long commute results in this:

Not only have I become so full of road rage that I’ve actually done a cost/benefit analysis of whether I should slam into the driver’s ed douche canoe who cut me off the other day, but my precarious home/work/personal life balance has gone from teetering on manageable to full face plant. I actually growled at my son the other night. Growled.

I’ve gone from mild mannered Jennifer Walters to full-on She-Hulk. Except I can’t seem to figure out how to transform back. Being constantly enraged will do that to you.

I’ve tried to figure out some solutions, but no amount of audio books will change the fact that after two hours in the car, I want to kill all the things. So I’m thinking it’s back to the train life for me. Especially because in a couple months, my office is moving even farther away to the heart of the seven-lanes-grinding-to-a-halt traffic hell that is Santa Clara.