Dancing With My Son

Ever since my four-year-old son laid eyes on the Chandelier video, he’s been improv dancing in our living room trying to recreate the steps. He stands up on the couch, throws his hands out wide, and launches backwards. He runs over to the curtains and gathers them in his arms. He’s imitating the choreography performed by the talented Maddie Ziegler, plus adding a few extra kicks and rolls on the ground for good measure.

Watching him move around the room with total abandon, looking at the joy in his eyes, I know exactly how he feels. Maybe he’s just being a kid dancing around, as kids do. Or maybe he’s got the fire and just HAS to move—which is how I feel 24 hours a day, 7 days a week STILL, even though my body won’t let me.

Sometimes I can’t help myself and I get up off the couch to join him. We hold hands and twirl around in a circle. I reach my arms up to the ceiling and out to him, and he instinctually follows, running into my arms or circling around my legs making movements of his own. We take each others cues, leading and following, gently guiding one another through the song. Sometimes we collapse into fits of laughter. Sometimes we end the dance emotionally, clinging to one another as if we’ll never experience this moment again.

And that’s my big fear. Because it’s been years since I’ve experienced the joy of dance at my peak, when my body would listen to my mind’s commands, when it gave way to the downbeat, when I felt comfortable enough to not only follow steps with precise accuracy but also add my own style, to flow through the movements, extend them out to the last drop of the last note.

Now I hear a powerful song and I’m practically crawling out of my skin to dance to it the way I imagine, the way I once could. Sometimes I try, but I inevitably end up laying down on the ground, stretching, stretching, breathing through the pain. I want to scream, “It’s not fair!” but how can I when I was blessed with the ability to dance in the first place? When so many people never experience that joy at all? Aren’t I lucky to have even had those moments?

When I was 16 years old, I was preparing to dance at the Kennedy Center in Washington, D.C., for the Jazz Dance World Congress. I was more nervous than I’d ever been at any dance competition—and this was just a performance. But the ornate ceiling and the rows and rows of red velour seats stretched out before me, and I felt my heart beating in my eardrums. As the music started and the lights came up, I rose up out of my body and moved. There were nine other dancers on stage, but we danced as one, and as we flew across the stage, we floated with a power that made everything easy. The effort was gone and only the dancing remained. That was the purest joy I’ve ever felt in my life.

Until my son came into this world. 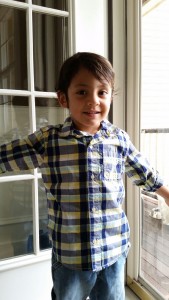 Now I watch him dance and part of me wants to warn him: “It’ll break your heart, Lucas.” But as I see him spin and throw his head back and giggle, I think to myself, “I can’t take that away from him, if that’s what he wants.” (Who knows what he wants, he’s only four. But I can’t discount the possibility.) So for now, I dance with him. I dance until the pain becomes too much and he yanks at my arm and asks me to dance some more. I lay down on the ground to stretch, smile up at him, and say:

One thought on “Dancing With My Son”