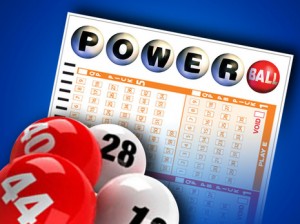 For the 30-grumble-grumble years I have been alive, I have known my father to purchase some kind of lottery/scratch/Powerball ticket just about every single day.  Dad is so invested in this insane dream of someday coming into buttloads of money, that he created a document on his computer—a list of people he plans to charitably share his winnings with. (Me and Mom are a little incredulous about this list…the MAILMAN, Fran, really?! Legit my dad has the mailman on this list, not even joking about that.)

Last night, the winning Powerball ticket was selected at Appletown, the tiny convenience store in my tiny hometown of Sterling where my parents still live, and where my dad practically religiously purchases from. (I can’t tell you how many times I ran in there to play the numbers for him.) For 30 glorious minutes, I thought that maybe, just maybe, my dad’s crazy dream might become reality. I called the family business, where Mom, Dad, and my Auntie Jean work.

“What’s wrong?” Auntie Jean answered. It was 7:00am my time, not my usual calling hour. When I told her about the Powerball ticket (which I had learned about while browsing Facebook during my morning coffee…okay, fine…during my morning poo), she did not hesitate.

“Oh my God, I’ll call you back.” Many long minutes passed before she discovered that yes, Dad had bought a Powerball ticket yesterday, and yes, he bought it from Appletown, but the man would not check the numbers.

I texted my father. “I know the numbers, Dad, just check your ticket.” Nope, Dad would not look. He wanted to just bask in the hope, in the limitless possibilities. I wanted my damn million dollars.

For the 30 minutes that Dad would not check his ticket, me and Auntie Jean and Mom plotted what we would do with our money and who we would and wouldn’t share it with. Auntie Jean and her daughter Alyssa got into a small tiff over it, and Alyssa hung up on her. Me and Mom argued about where I would buy my new house, California or Massachusetts. We all agreed my Uncle John had already spent the money.

Finally, Dad looked at his ticket. Turns out that he bought Mega Millions and one other scratch ticket from Appletown, but for whatever reason, decided to buy Powerball at a stupid gas station in the stupid next town over from ours. The lucky winner still hasn’t come forward, but is believed to be a woman who is actually from Sterling.

When I came into work this morning, I told a couple friends about our ALMOST win. To cheer me up, they said, “But winning the lottery can ruin lives!” Judging from our 30 minutes of bickering and in-fighting on account of the slim possibility of maaaaybe winning, I suppose they are right.

…oh who am I kidding, I still want that damn money.